TIME Magazine’s Style & Design has chosen the 100 most influential icons in the world of fashion and style. The list dates back to 1923 — to the birth of TIME, and to the foundations of modern fashion. Names on the list are categorically filtered into various aspects of the industry; separating designers and their brands, models, muses, photographers, fashion periodical editors, and stylists. You can check out the full list of Icons here, click a name and read on to find out why they were selected for this ‘unique’ feature. You, like me could make another list of 100 of who they have missed!!!

The worlds of music, skating, and fashion are a shade of grey following the passing of Vans co-founder James Van Doren. James and his brother Paul opened their first Vans store in 1966 and have since pushed the skate culture into the mainstream, with their iconic canvas shoes. 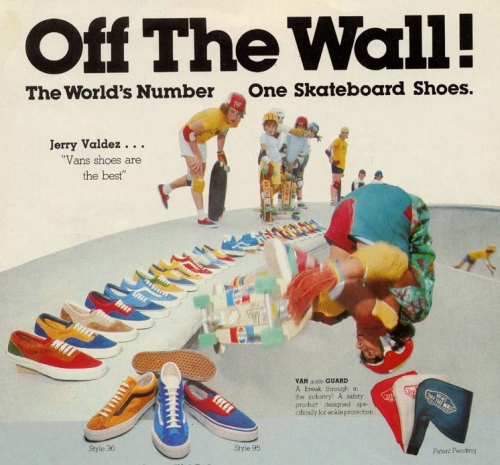 You can read a great write-up on James’ life below from his obituary in the LA Times;

James Van Doren and his older brother Paul had only sample sneakers to offer when they opened their first store, in Anaheim, in 1966. They took a dozen orders in the morning and delivered custom canvas deck shoes, made in their adjacent factory, in the afternoon.

Operating as the Van Doren Rubber Co., the brothers and two other co-founders planned to succeed by cutting out the middleman and selling their distinctive thick rubber-soled shoes directly to the public.

By the early 1970s, the company owed some of its success to Southern California’s burgeoning skateboard culture. The shoes were especially valued for the sticky rubber soles that helped skaters grip their boards — an innovation devised by Van Doren.

From the start, the casual shoes were known by a single name: Vans.

“He was a mechanic, a chemist, the brains behind the early shoe,” said his nephew, Steve Van Doren, one of several family members who still work for the company. “In his garage, he made all the molds for the very first soles,” including the trademark waffle design.

With James at the helm, Vans built up its manufacturing operation, doubled its workforce and greatly expanded its product line far beyond the initial deck shoes into the competitive athletic shoe market. To test running shoes, he became a serious runner and raced in half-marathons.

The brand gained national recognition when Sean Penn donned a pair of checkerboard slip-on Vans to play the spaced-out Spicoli in the 1982 film “Fast Times at Ridgemont High.”

“He guided Vans through the checkerboard era, and we were flying,” said Steve Van Doren, son of company co-founder Paul. “We were the hottest thing going.”

While trying to absorb expansion costs, Vans was squeezed by dwindling sales in the early 1980s as the “Ridgemont High” fad faded and cheaper foreign imitations hit the market.

“We had kind of gotten away from our sweet spot and off track into athletic shoes that were expensive to make in America,” Steve said, when the competition made them overseas.

Heavy losses sent the company into bankruptcy, which forced a court-ordered management shake-up. In 1984, James left Vans and returned control to Paul, who came out of semi-retirement to run the firm, then based in Orange. Four years later, an investment banking company bought Vans, which has been sold several times since.

Only 45 years old when he was ousted, Van Doren became a general contractor who often worked for free for people who couldn’t afford to pay, said James Van Doren Jr., one of his three sons.

Born March 20, 1939, in Weymouth, Mass., the senior James was one of five children of Johnson and Rena Van Doren. His father was an inventor and his mother a seamstress. James spent two years at Northeastern University in Boston and a decade with the Randolph Rubber Manufacturing Co. in Massachusetts, working his way up to factory manager. The two Van Doren brothers moved west in 1964 to run a Randolph factory in Garden Grove and left the company the next year to start their own firm.

“He was a very driven man, a hard worker, very giving, very funny,” his son James said. “He could control a room with his stories.” In addition to Char, his wife of 15 years, Van Doren is survived by his sons from a previous marriage, James, Mark and Eric; brothers Paul and Robert; sister Bernice; and five grandchildren. 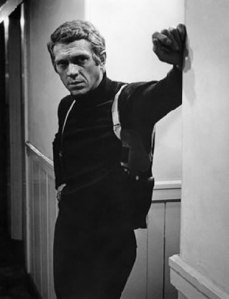 The highest-paid film star of his time, Steve McQueen had a rebellious nature that complemented his onscreen American antihero persona and earned him the nickname “The King of Cool.” Off-screen, the actor was passionate about motorbike and car racing, and had a natural yet distinctive all-American boy-meets-renegade style that, together with his no-nonsense man’s man personality, made him a style icon both in his time and in ours.
Style-wise, Steve McQueen excelled at taking classic American sportswear and giving it a rugged, masculine edge. Hallmarks of the actor’s style included aviators, slim-cut tailored suits, sport coats, zip-up windbreakers, khakis, button-downs in pale colours, V-neck sweaters, and shawl-collared cardigans, as well as polo shirts. Of course, as a racing enthusiast, the iconic star was also a fan of clothing he could get down and dirty in, such as racing jackets, simple cotton T-shirts, leather jackets, gloves, boots, and denim, denim and more denim.
Interestingly, although Steve McQueen was most in his element when dressed down in jeans, he cleaned up so well that Rolex named their sophisticated Explorer watch after him, officially calling it the McQueen Rolex. Additionally, the Tag Heuer Monaco watch the actor donned in 1971’s Le Mans made such a splash that the company re-released it in the 1990s. This style icon was also the first man to grace the cover of the fashion magazine Harper’s Bazaar

World famous superstars Joe D’Allessandro and Johnny Rotten have both been recently featured in Hedi’s photographic blog. Joe D’Allesandro, an American actor and Warhol superstar, is generally considered to be the most famous male sex symbol of American underground films of the 20th century. Meanwhile, Jonny Rotten, is an English singer-songwriter, best known as the lead vocalist and lyricist of the punk rock group the Sex Pistols during the 1970s and of the post-punk group Public Image Ltd. in the 1980s and 1990s. Hedi’s signature style shines across each of these intimate photographs which have been collated here for your viewing pleasure

Check out more of the photos here 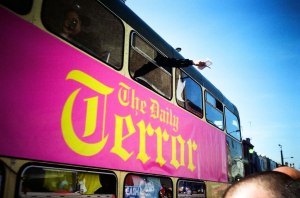 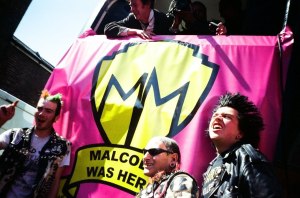 Malcolm McClaren was buried at Highgate Cemetery today. There was a procession through Camden around 1pm, his son Joe had asked that people observe one minute of mayhem at 12noon, “Put on your favourite records and let it RIP!” We think a fitting tribute to a legend.
Source: fUK 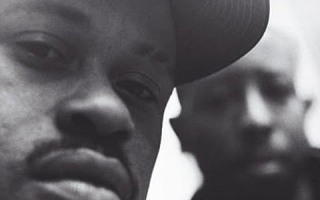 Rapper Guru, who rose to fame with hip-hop outfit GangStarr, has died aged 43 after a long battle with cancer. The MC, whose real name was Keith Elam, suffered a cardiac arrest in February after surgery to treat the disease and briefly lapsed into a coma. He will be sorely missed, but never forgotten.
Source: BBC