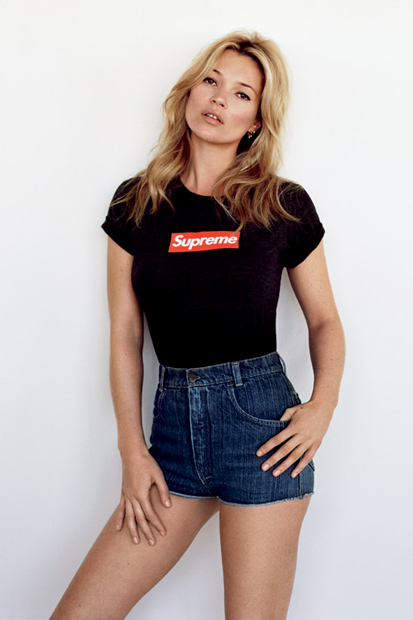 The Kate Moss for Supreme campaign was and still is one of the most successful streetwear campaigns of all time – surely cementing the New York brand’s legacy for years to come. Photographed by Alasdair McLellan as part of i-D Magazine’s “Royalty” Issue, the holdover shot of Moss is included in the editorial as well as an interview with James Jebbia, founder and owner of Supreme. The issue can be purchased online for £9.00

i-D Magazine celebrate its 30th Birthday, with a special 3 cover issue, all shot by Nick Knight, and based on the theme THEN, NOW AND NEXT, the cover’s star, Naomi Campbell, Kate Moss and Lady Gaga. 30 years in this industry is no mean feat!
“30 years – whoosh, more than an instant in i-D’s lifeline – it’s a generation. Three decades to be celebrated and contained in this special issue. The whole issue was created by Nick Knight 200 portraits that SHOWstudio made at the close of 2009 in Somerset House – once the home of British passports, now the central location for British Fashion Week. Nick’s celebration of identity was also a commemorative project inspired by the 5th birthday issue of i-D, where 100 portraits were featured in The Grown Up Issue. 25 years on, the gallery selection grew to 200. Happy birthday!” Terry Jones, Editor-in-Chief, i-D