Now available is the Blazer Mid Wool Vac Tech from Nike. Clean and packing a lot of style, this shoe features all around premium wool upper, with leather lining and two-tone laces with the signature Nike swoosh embossed on both sides of the shoe. Easy to wear in my opinion.

Of all the retro styles to undergo Nike’s pre-yellowed vintage treatment, it appears the Blazer is on the receiving end of that particular honour more frequently than most. It makes sense — the Blazer was born in 1973, after all, and its spartan, no-frills design certainly evokes a simpler time. A new Electrolime colorway, however, makes the case that the sneaker is just as relevant today as it was in the polyester ’70s. Built with a ballistic nylon upper in an appealing neon green hue that highlights the shoe’s clean lines, the Vintage Nylon Blazer Hi is available for pre-order from Nike stockists.

It’s fair to say that one of the most popular shoes this summer from Nike, has been the Blazer Vintage. Over the months we’ve seen an abundance of colourways. Not slowing things down, Nike introduce the multi-coloured Blazer Vinatge. Coming in both a high and low model, some would say these bright make-ups pay homage to the various colourways released in the past!… 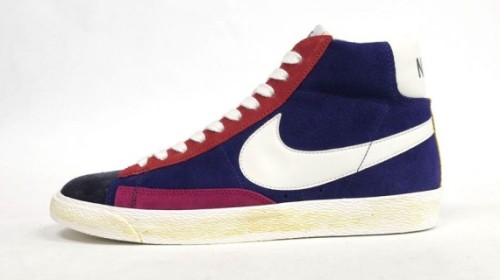 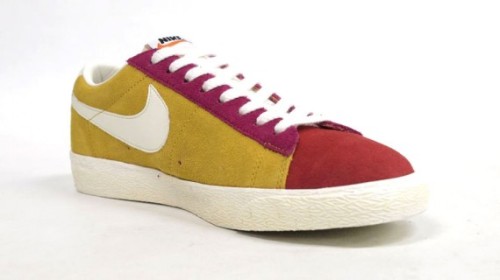 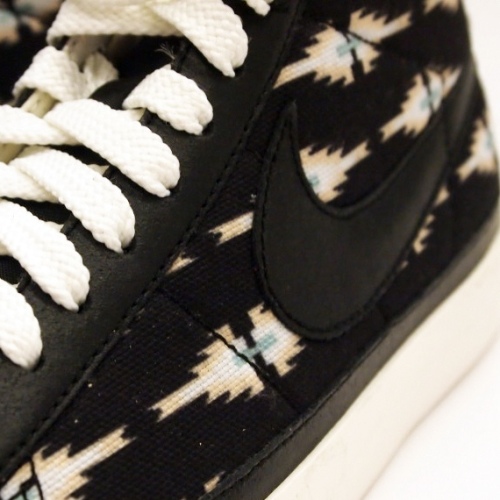 Perhaps drawing parallel from the expansiveness of the Aztec Empire, the Nike Sportswear Aztec Pack not only encompass the Air Max 1. It also includes my favourite, the Nike Blazer High and Low. Because of its canvas upper, instead of the usual leather appointments, the ancient Aztec prints are more acute on the Blazers. Available in both Blazer Mid and Low with two variants of the print, in black or grain. Both scheduled to launch as part Nike’s Holiday 2011 Collection in the coming weeks.

After seeing A Tribe Called Quest-inspired Jordans release awhile back, it should come as no surprise that Nike intends to continue the Low End Theory-inspired designs. This time around the popular Nike SB Blazer gets the special rap group makeover with details like a red insole and red swoosh, alongside a green tongue tag and green laces. The shoe’s suede upper includes Low End Theory-esque all-over graphics that are featured on both sides. This quickstrike release can be found at select Nike retailers

Continuing to dig up a number of vintage styles from its archives, Nike has reissued the classic Vintage Low model in this sinful red and white colorway. Made from a genuine suede upper with a contrasting white vulcanized sole, elongated swoosh and cotton laces, the sneaker is all you need to put the finishing touches on your summer look. Priced at £59.00, the shoe is currently available for pre-order here

Adding to an already great lineup Steven Alan’s Nike collaboration brings in another classic, the Blazer Mid. Continuing the clean looks of the rest of the line, the Blazer Mid gets updated with lightweight canvas and side zips for easier slip on. Link

Uniforms For The Dedicated Varsity Blazer

So we all know that the varsity jacket has been a staple of a man’s, better yet any fashion conscious individuals wardrobe for a long time! Now I dont know about you but I’m getting rather bored, I’m sure I’ve seen every kind of varsity jacket there is –  ones with black leather sleeves, white sleeves, mustard sleeves even no sleeves! I was doing my weekly nose on Asos and spotted this beautiful Uniform for the Dedicated varsity inspired blazer that can be worn smart or street..Buy here 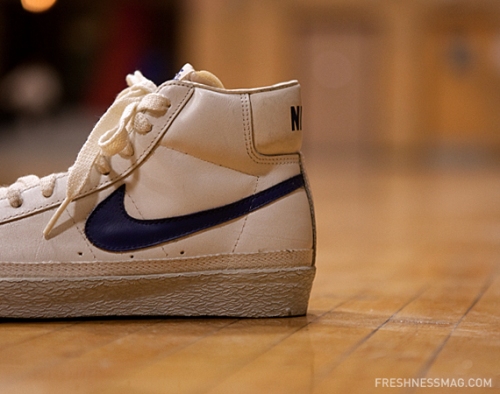 RE-Fresh, a new bi-weekly segment at Freshness, and it is a bit different than their curated dose of daily news. Take a look below.

Nike now employs somewhere in the area of 30,000 employees. But 40 years ago, in 1971, Nike had just launched their first full line after selling sneakers out of the trunk of a car.  That same year, the swoosh that is one of the most recognizable logos in the world, was designed by Carolyn Davidson, for which she was paid $35 (though she would later receive an undisclosed stockpile of stock from Phil Knight more than a decade later).  The first Nike Basketball shoe to utilize Nike’s swoosh was the Blazer, which debuted in 1972. The shoe boldly featured a giant swoosh through the upper of the slim and direct silhouette that, when viewed today, look more applicable to today’s lifestyle shoes than a sneaker designed for the hardwood. Everyone noticed the swoosh, which began to be worn on the hardwood by the likes of Geoff Petrie, the “Iceman” George Gervin (who later had a limited edition Blazer crafted after his likeness in 2008), World B. Free, Dennis Johnson, and Darrel “Dr. Dunkenstein” Griffith. The Portland Trail Blazers wore the shoe as a team during their 1977 championship, which expanded the exposure of the sneaker as well as the swoosh.

The iconoclastic rancor of the mid to late 60s still resonated in the early 1970s with Anti-Vietnam protests and widespread youth unrest. Stevie Wonder had just released his landmark Innervisionsalbum and there was a major shuffle in power positions in Hollywood with the rise of directors like Scorcese and Coppola, who were making their indelible mark on cinema during those years. In short, the masses were calling for shifts away from antiquated models and ideas. The Blazer was born during this time of flux, and it’s aggressive swoosh, tab above the midsole, and heel logo melded for a design that met with success and marked Phil Knight and his upstart company as one that understood the pulse of the people.

During the 70s, the popularity of the shoe grew with clever marketing by Nike, and the 80s still found wearers of the Blazer in the pro ranks. And almost 40 years after the original model released, we still see regular releases under the Nike Sportswear banner. But before Sportswear featured revamped models, a Nike spokesperson named Lance Mountain pitched the idea of a modified version of the Blazer to Nike’s Skateboarding line. The SB Blazer added cushioning to the collar and padded the insoles with Zoom Air to aid the rider with stability and cushioning. One Blazer SB that has made sneaker fans drool since it’s release is the Supreme SB Blazer, which features a luxe quilted leather (the likes of which would normally be found on a Chanel bag), and a green and red, Gucci-inspired heel tab with a gold embossed loop

The juxtaposition between Nike SB’s collaboration with Supreme to the original predecessor is the perfect illustration of today’s theme-and-variation sneaker game. To this day, the longest lineups and biggest hype surrounds retro models–the last two holiday releases of the Air Jordan XI retro in the Space Jam and Cool Grey editions and the Patta x Parra Air Max 1 are two recent examples. So the next time you see that simple silhouette, think about a time when people would have snapped their neck to see that swoosh and remember that even the biggest ideas start small 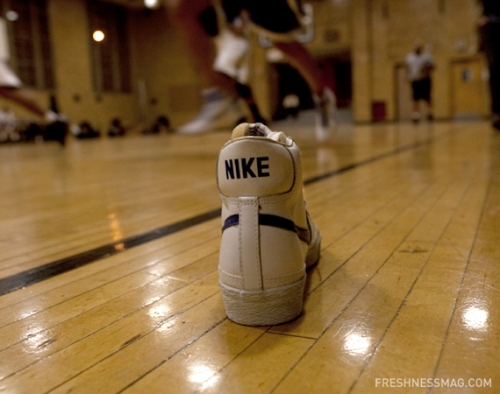 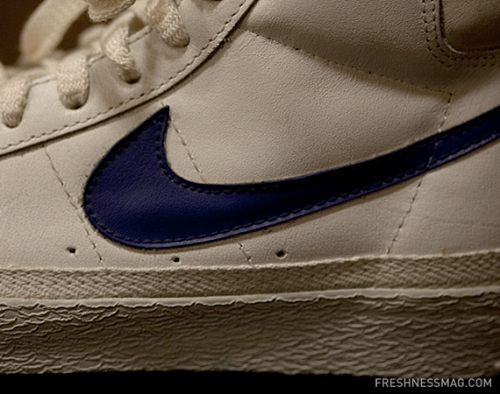 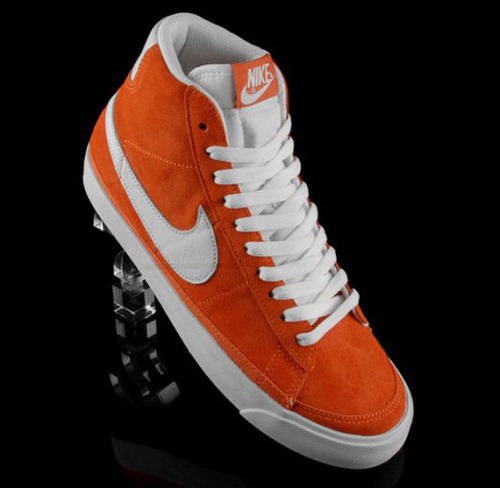 Part of the size? x Nike Orange Pack, the UK sneaker and streetwear select store size? are back with their usual creative antics, and this time the Nike Blazer got tricked out in an exclusive colourway. Brightly coloured orange and white combination seem almost retro but you better believe that these are limited edition of 500 pairs. Get your hands on these sneakers only at size? retailers and online store right now. Orange smooth leather upper is matched by orange “?” logo on the heel. White Swoosh, soles, shoe laces, inner lining and tongue high lights the mid cut kicks. Also packaged are bright orange shoe laces in case the white ones get dirty!! Cop here