Having worked on a few projects already in the past, the new ALIFE x PUMA  R698 sneaker has released at select sneaker accounts this week. The New York crew gave the sneaker silhouette a full metallic silver upper. While some parts of the sneaker feature perforated silver metallic leather uppers, others feature an ALIFE all-over embossed leather. A special ALIFE x PUMA  tag has been placed on the tongue and the Trinomic branding has been embossed on the heel of the sneakers. Furthermore both brands have logo placements on the cork insoles. You can purchase the ALIFE x PUMA R698 now from Concept by Cruise. 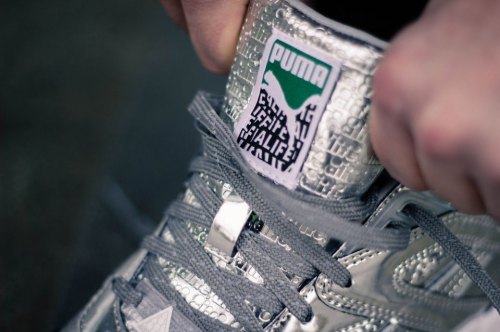 With friends like Joe Garvey, Mac Huelster, Doug Reddish, Matt Terwilliger, and Rennobuko Ku’uleialoha Chang, who needs outsource for models? Introducing the new ALIFE Sportswear Collection for Spring 2011, a boisterous line of colors with a panache of street smarts. With help from their Lower East Side compatriots, the silhouettes are more streamlined than previous collection, but only on appearance. There is still enough space for you to do a Backside Air on your skate deck with ripping a new “access panel” on your pants or shirt. Buy Alife here

On Thursday April 15th, ALIFE hosted the first “ALIFE SESSIONS” of the 2010 season in its Rivington Street courtyard.
Titled “GO GREEN”, this time Alife was honoured to present CYPRESS HILL and NINJASONIK as performing guests and FISCHERSPOONER as guest DJs. As an added bonus, Ricky Powell kept things interesting as the evening’s MC, while DJ NIRE entertained between acts.
The event celebrated 420, the date of both Ninjasonik and Cypress Hill’s new album releases, among other things.
As usual, Alife created a themed atmosphere: Green walls, green grass and a commissioned two-story tall mural that reflected the spirit of 420. In addition, and in line with Alife Session tradition, a commemorative “concert” T-shirt was also created.