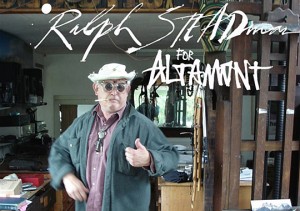 Altamont partners with Ralph Steadman on a special T-shirt series printed with illustrations from Hunter S. Thompson’s long-lost novel, The Curse of Lono.
In his early life, the United Kingdom’s Ralph Steadman was held hostage by an overgrown insect known as the Great Bug of Creativity. Instead of trying to escape back into the creature comforts of the moribund workaday world, young Ralph eventually saw the light and wisely chose to become an artist instead.
Soon after, his star really began to rise. Ralph became well-known for his pictorial contributions to American author Hunter S. Thompson’s writings. Together, they created gonzo journalism–an unpolished, exaggerated, profane form of literature that blends fact and fiction, and in which the reporter becomes a main character.
In the 1970s and ’80s, Ralph’s distorted, chaotic drawings perfectly mirrored Hunter’s corrosive, stream-of-consciousness words in such gonzo classics as Fear and Loathing in Las Vegas in 1971 and the lesser-known The Curse of Lono in 1983. In print for only a short while, the latter was re-issued in 2005, due to Ralph’s popularity, complete with a large number of his drawings and paintings. Available here 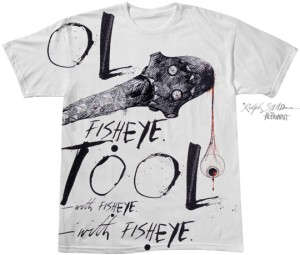 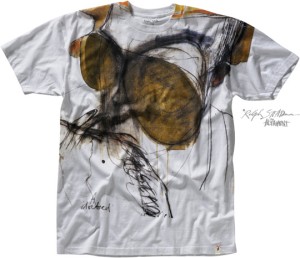 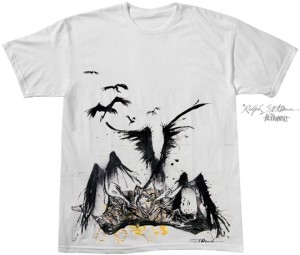 One response to “Ralph Steadman For Altamont T-shirts”